Well…………Its safe to say that last week was a clusterfuck as big as a monkey fucking a football. Denver was destroyed by Buffalo and the Raiders were bitch slapped by the Jets. The Chargers and Chiefs were on their bye week and that was the best thing that happened to the division. This week we have the AFC West vs the AFC West. Let’s get into it.

Chargers at Broncos
The Chargers are traveling to the winter wonderland that is Denver to play the Broncos. The weather is calling for a high of 39 degrees. Perfect weather for running the ball and controlling the clock. The only question is which team will actually do that. Both teams have good running games with two good backs. To make things even more interesting, Rivers has started to regress and that is a big factor. Both teams have good pass rushers. The more you look at this game the more interesting it becomes.

The Broncos are a very tough team to beat at home and even harder in cold weather. The Chargers play well on the road against division teams and I expect them to do exactly that. This game will come down to a big play or two , a commitment to the run and great defense.

Fantasy Player of the Game: The running backs for both teams are a great call. Eckler/Gordon and Lindsay/Freeman. The only bad part is which duo will show up.

Raiders at Chiefs
This is a red flag game for the Raiders in every way. Carr has never won in Kansas City and he does not play well in the cold. To make matter worse, Andy Reid does not lose coming off a bye week. His teams are always ready. Add in it is a home game, that is like 3 strikes right there. Let’s take it a step further, WR Hill is playing which is not good for the Raiders but great for the Chiefs.

The Raiders have a great run game and are pissed after being destroyed by the Jets. That is the Chiefs weakest link. The Chiefs are well aware and are going to be ready for this. They also know that the Raiders have a huge issue with speed receivers which they have plenty of. This is going to be a the game that defines the division.

Fantasy Player of the Game: Tyreek Hill is coming back and with his speed, the Raiders are in trouble. This guy is a nightmare for most teams but even worse for a bad secondary. 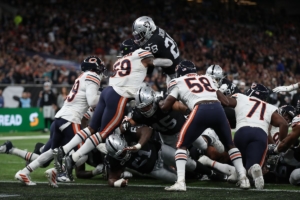 Happy Thanksgiving to all of you and your families!

Regards,
The OG, AKA The Old Fart
JMC